Effect of Temperature on rate of Reaction

The rate of reaction is a function of many things, including surface area, concentration and temperature. For a reaction to take place, the molecules must collide with enough energy (called the Activation Energy, EA) Consider the reactant molecules to be at a particular temperature. By definition, the molecules have an average kinetic energy, some with more than the average, some with less. If we increase the temperature of a system, the average kinetic energy will increase and the number of molecules with the 'minimum' energy to react, thus increasing the frequency (rate) of reaction. 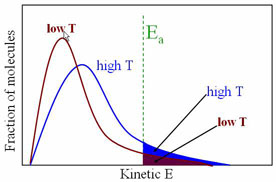 Svante Arrhenius has shown that for simple reactions, the equation

where k = rate constant, A is the collision frequency factor (function of the nature of reaction) R is the gas constant, T is the absolute temperature, EA is the activation energy, and e is the base of the natural logarithms. We want to know the relationship between rate of reactions and two different temperatures. After some creative algebra, we can transform the Arrehenius equation into something manageable:

k1 is the rate constant at temperature T1, and k2 is the rate at T2.
In this experiment, the reaction to be studied is the oxidation of HI to I2 by the action of H2O2 according to the equation

The total volume of the solution containing the components of the reaction is kept constant during the course of this experiment. In fact, we keep everything constant for each run EXCEPT the temperature, so for our purposes, we can write the rate law as: rate = k (constant)

Here, we will measure the time taken to produce a certain amount of I2. From this we calculate rate. You will do three runs at near room temperature, and average the three rate values from each run, then do ONE run near zero, getting the rate of reaction at the lower T. You will then have 2 rate's (one of which is an average) and 2 T's. Drop it into the screwy Arrehenius equation above and you get your Ea.
In this experiment, HI is produced by dissolving KI in a solution containing an excess of H2SO4:
1 H2SO4 + 1 KI → 1 HI + KHSO4

Starch is added to this solution as the indicator of free iodine. We start the stopwatch at the moment we add our second reactant, H2O2. Of course the production of I2 begins immediately, and the blue color will instantly appear. A measured volume of 0.1 M Na2S2O3 is then added, causing the blue color to disappear due to the reduction of the I2 by thiosulfate. The solution will stay colorless until enough additional I2 is produced by H2O2-HI oxidation to react with the remaining Na2S2O3 in the solution. At this point the blue color will reappear. The time is noted (stop stopwatch)  This represents the time required to produce I2 equivalent to the Na2S2O3 in the volume of 0.1 M Na2S2O3 which was added. The entire reaction will be repeated with the same concentrations, but at a different temperature.

Wow, that is confusing. You probably wanna watch the explanation screencast a few times.

You will be running the entire reaction procedure (a minimum of) 4 times, once in a water-ice bath at around 0.0 °C, and 3x  at around 25 °C. The procedure below is the same for all runs.

1. Add  your particular temperature of water (room T water or ice water) to a 1L beaker and a 400 mL beaker (let's call it the rxn beaker) with your particular temperature of water (room T water or ice water) The 1 L beaker with be a constant temperature bath for the rxn beaker, so it does not need that much.
2. Add 10.00 mL of KI using a volumetric pipet to the rxn beaker alone with ~200 mL of DI water.
3. Add 15 mL of 6M H2SO4 (caution!) and carefully place the beaker in the 1L water (or ice for the low temp run) bath beaker. Place a stir bar in the solution and place the entire system on a stir plate and turn it on (no heat!!)
5. Add 5.00 mL of 0.6% H2O2 solution (using a volumetric pipet) and place it in a test tube, stopper it, and put it in the rxn beaker.
6. You want to wait until everything is at the desired temperature before you go any further. Once you start the reaction, you will want to keep the system stirring to keep everything at the same (water bath) temperature.
7. Add some starch indicator to the rxn beaker. Your instructor will tell you how much.
8. Add the H2O2 to the solution and begin timing. The solution should immediately turn blue. That’s a good thing. The stopwatch does not get stopped until that blue color returns (you are about to make it go away)
9.  WITHIN 30 SECONDS, Add 4.00 mL of 0.100 M Na2S2O3 to the rxn beaker using a volumetric pipet.
10. Stop the stopwatch as soon as the solution STARTS to turn the blue/brown color again.

Three good runs at room T, calc rate, calc k for each run, average the three k's to get ONE k for that T.
One good run at near ice T (rxn temp needs to be lower than 4 C), calc rate, calc k
Calc Ea from the two T's, and the two k's.

For this experiment, you are writing a submitting a computer generated data sheet that has everything included for each run (measured T, time for rxn, rate of rxn, k for each run, average k for each set of T) The only sample calculation you need to show me is the Ea calc. Of course, you also need to add a short form memo style commentary section.
Prelab: